A Place to Call Home

On a quest to uncover the perfect wedding venue — somewhere with picturesque scenery and a plethora of great, local wine — Jeremy and Krystle Stamps stumbled upon Elkin. They didn’t know it at the time, but the discovery would change the trajectory of their lives.

After getting married at Elkin Creek Winery, the couple returned to Orlando, where both had jobs working for Disney World — Jeremy in stage production and Krystle helping develop costumes for Disney, Marvel, Pixar, and Star Wars characters.

But the small North Carolina town always called them back. “We would visit Elkin 10 days at a time and hang out and go to a local cabin and local wineries,” Jeremy says. And in 2017, when the two oenophiles found themselves ready for a lifestyle change, Elkin felt like the obvious choice — plus, the town presented a new career opportunity.

“There are probably 30 to 45 wineries within a half-hour from here, and all of them close at 5 o’clock. So if it’s Wednesday, and you’re hanging out in your cabin for 10 days, and it’s 8 o’clock, where are you going to go?” Jeremy says. “I felt like there was a huge economic opportunity.”

Answering the call, he and Krystle opened The Wisdom Table, a wine bar and shop in the old Belk’s department storefront, an 11,000-square-foot space in downtown Elkin. It’s a full retail hub, with about half the inventory stocked from North Carolina vineyards and the other half full of classics from France, Italy, Spain, South Africa, and Greece.

Patrons can taste a variety of grapes at the space’s bar, which Jeremy built himself. “The Wisdom Table is a local hangout for all the wine nerds and winemakers, a place to come in and try everyone else’s wine,” he says. 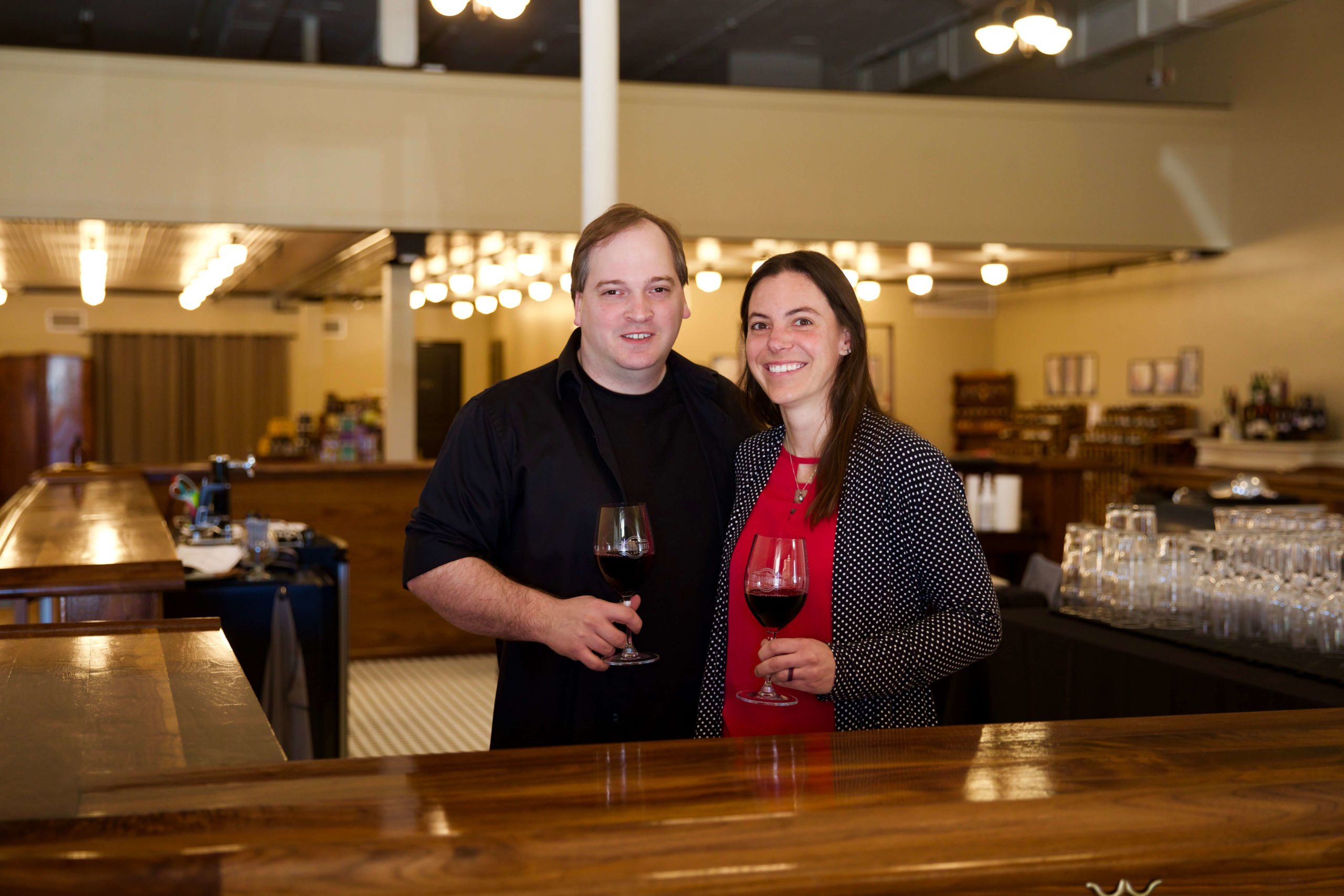 Those dozens of wineries are accessible safely, too: The Elkin Vine Line service offers five different tour itineraries in their “Wine Hoppers” — 12-passenger vans that stop at four different vineyards. Whether it’s the dry Tempranillo at Jones Von Drehle or the traditional sparkling at Raffaldini, each line is tailored for a particular tasting experience. And no matter which wineries you visit, you’re sure to hear a variety of live music — including at Jones Von Drehle, where a new 1,000-seat amphitheater will soon host concerts and events.

“When tobacco fell out and smoking started getting banned in North Carolina, there was a huge push to [change tobacco farmland] to vineyards,” Jeremy explains. “Agritourism is the way to go, because it not only helps the grower and winemaker but it helps the hotels, it helps the restaurants, it helps everyone.”

A Place to Call Home

Elkin’s surrounding wineries and vineyards drove the Stamps’s decision to move, but soon after they settled in, they had cause to learn about another local industry. “I pulled my back out once when I was building the bar,” Jeremy remembers, “and from the time I left our shop to the time I saw a doctor at Hugh Chatham was 12 minutes — including the drive over there.”

Hugh Chatham Memorial Hospital, built in the early 1930s, is an anchor of one of Elkin’s other primary industries: health care. With its strategic location on the Yadkin River, the town used to be a mill-centered community, and the Chatham family established wool and cotton mills as firm economic drivers. (To learn more about the history of Elkin and the Chatham family, watch this video.) The rise of spirits and wine, as well as the expansion of health services in the area, has filled the space left behind when that industry dried up. The former, however, continues to pull new residents in with entrepreneurial visions.

Keith Stringer, a chef at the Harvest Grill — part of the Shelton Vineyards property — who also makes desserts for the Wisdom Table, moved from Raleigh to Elkin with his wife, Holly, in 2017. Keith had spent years in kitchens: Humble Pie in Raleigh, Coharie Country Club in Clinton, even a lobster shack in Maine. When he and Holly first began visiting Elkin, they realized it was lacking an experience many wine tourists might enjoy: a bed and breakfast.

“We’d been out to California, in the Napa Valley, and there were bed and breakfasts all over the place, going from small and intimate to larger. We started talking about maybe doing that type of business out here,” Keith says. “We got a little bit more serious when my daughter went to Appalachian State. We would stop in Elkin on the way up and on the way back and sample a few of the vineyards and just fell in love with the area.”

The Stringers’ Six28 House is set to open in May in a 100-year-old renovated house near downtown. It’ll only be a few rooms to start, but Keith plans a full breakfast on the weekends and wine-paired meals on Friday and Saturday nights, in coordination with local growers.

Wine may be Elkin’s dominant libation, but other liquid options give locals and visitors plenty of choices. Skull Camp Brewing’s taproom offers dozens of beers and a food menu full of smoked options — even their burgers feature house-smoked meat. Angry Troll Brewery offers those strolling around downtown Elkin a full barcade alongside wood-fired pizzas and brews. 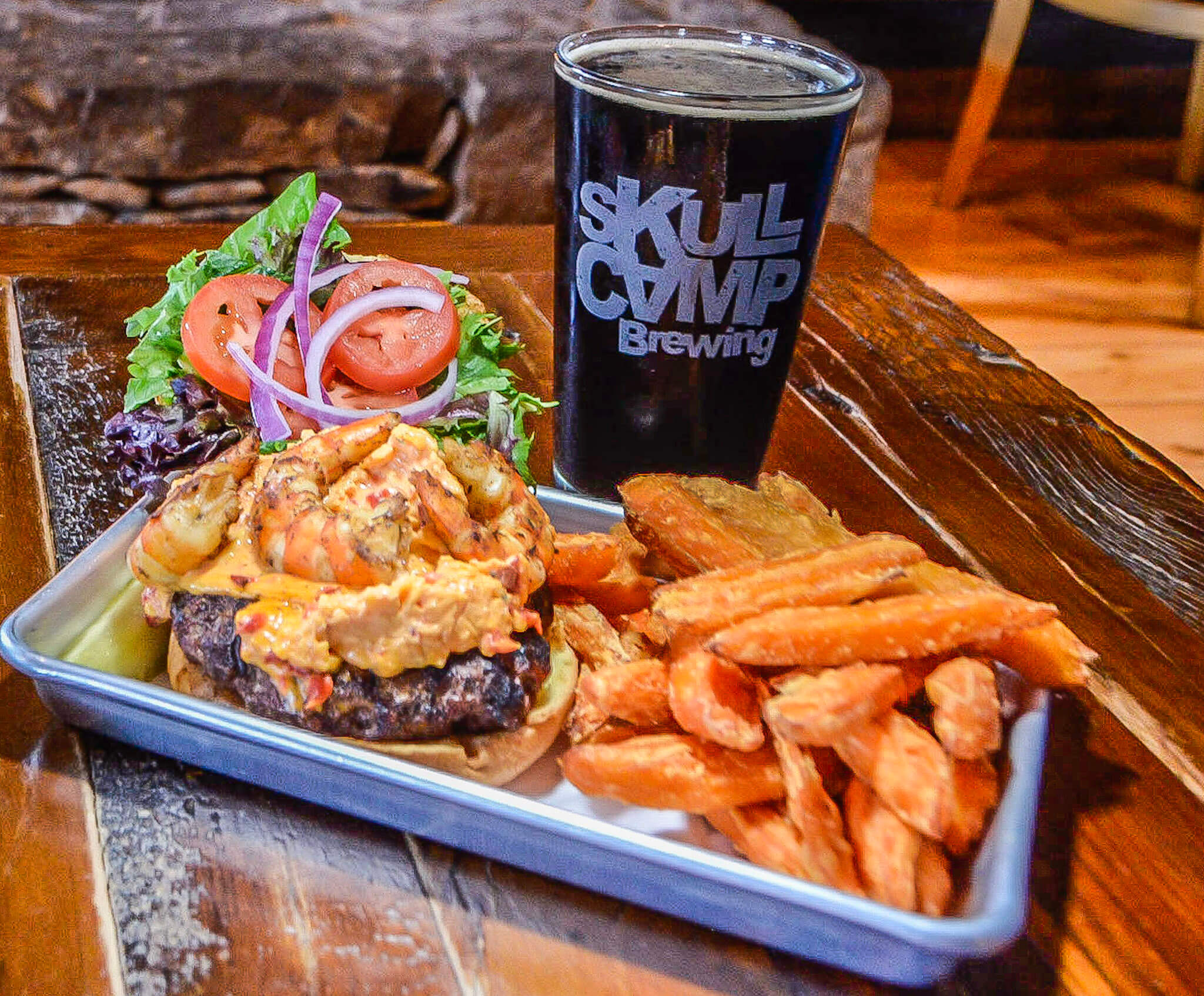 Another Raleigh transplant, Amanda Edgerley, landed in Elkin three years ago. In December of 2019, she opened Fruition, a cocktail bar just two blocks down from The Wisdom Table.

“I saw the opportunity to start a business here: a small town, up-and-coming, property was affordable, and the people are awesome,” Edgerley says. “I love the fact that we’re near the river and the mountains — a combination of everything.”

With close access to the Blue Ridge Parkway, a series of hiking trails, and river activities like canoeing and kayaking, Elkin has the weekend getaway appeal. But even for local entrepreneurs who’ve found a way to transform their vacations into everyday life, the town’s culinary scene keeps things new and fresh. Like El Ahorro’s authentic Mexican offerings (“Some of the best Mexican food I’ve found in the entire state,” Jeremy says) and Prime Thai’s knack for pairing entrées with a number of the region’s wines.

“We get a huge amount of traffic of people coming from Pennsylvania, Ohio, New York,” Jeremy says. “It’s definitely one of those places — we would come up here and try every single winery and we couldn’t get through all of them in one week.”

And while Elkin is a perfect place for a getaway, the Stamps think it’s an even better place to live. After all, as they can attest, why visit when you can simply stay forever?