Surry Community College’s Advanced Manufacturing Day on Friday brought in 350 students from area schools to get information about training, education and jobs in advanced manufacturing.

“I promise you won’t have trouble finding a job if you have the skills,” said Doug Slate, mechatronics engineering lead instructor, to a group of Mount Airy Middle School students.

He then talked numbers, telling them that graduates of his two-year program who learn the necessary skills are qualified for jobs in Surry and Yadkin County with starting pay of $21 to $22 per hour. He said if they were willing to drive to Winston-Salem, they could make $32 an hour, but admitted that was the exception. Those jobs average $21-$24 an hour.

“That’s right out of school,” he said. “With excellent benefits.”

Slate went on to say that he knew of 30 open positions — but telling the students they might have to drive to Winston-Salem or Iredell County — and the college only graduated four people last year. “It’s been that way for several years,” he said. “Eighty percent or better have jobs before they walk across the stage to get their diploma.”

Slate made the case to the students that a two-year technical degree in his mechatronics program — which he defined as a combination of mechanics, electronics and robotics — was an alternative path to a four-year degree. “People with four-year degrees are calling me and saying they want to come back and take my program.”

Martha Holt, a North Surry senior, said she was most interested in seeing the larger robots. She has worked with one of the smaller models in high school and wants to see how it applies to the real world. Martha said she was interested in bio-medical engineering, specifically making medical devices.

Jordan Crowson, a mechatronics instructor, was showing students how the largest of Surry’s four robots works. The big yellow machine is capable of lifting several thousand pounds, according to Crowson.

“We’re the only college in the state that has a set-up like this,” he told the students.

“Students learn to program the robots,” he said. “But the simulation software is like a video game. This is real.”

He then introduced his department’s robot to the students. His name is Baxter, and unlike the mechatronics robots, Baxter has a face. Above the arms that perform tasks, Baxter has a computer screen where the head would be on a human. Jones showed the kids how to pull up a menu and use it to program Baxter. But there are also eyes and eyebrows on the screen, and they are quite expressive.

As the kids took turns operating Baxter, Jones warned them to step back when he was ready to go. “It hurts when he slaps you up side of the head,” Jones told the students.

“He won’t complain. He doesn’t need to go to the bathroom. He doesn’t want a smoke. But sometimes, he doesn’t get it right,” Jones explained Baxter’s performance to the kids. And on those occasions when Baxter didn’t get it right, his eyes would turn down into a sad, pouty face.

“Any kind of metal, machinists had something to do with it,” Corey Easter, Computer-Integrated Machining lead instructor, said. “We drive the economy,” and added that Ingersol-Rand’s whole business is machining.

On the other side of the campus in the Shelton-Badgett Center for Viticulture and Enology, several area companies involved in advanced manufacturing had set up booths to talk to the students.

Ingersoll-Rand, which has a facility in Mocksville, was one of them. Stacy West said he wanted to show students there were other options for a good career and get them to think about technical careers. He said his company is growing, and they are looking for new hires in machining and maintenance. They are beginning a $30 million project converting to robotics to give them the precision they are looking for, and they will need trained people.

Jake Speaks, spokesperson for Dynamic Machining and Manufacturing in King, said “I want to spread our name to some of these students, both to the college students when they come out of school, and to the younger kids when they come along several years from now.”

Aaron Morse and Michael Cummings, both electronics students who graduate in May, came out of the Shelton-Badgett Center, feeling positive.

“I had some good conversations,” said Morse.

When asked if he had received any job offers, Cummings smiled and said, “Not yet.” 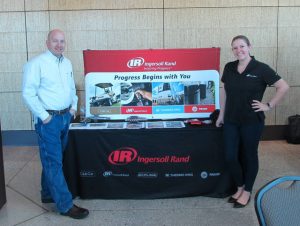 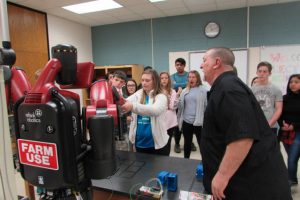 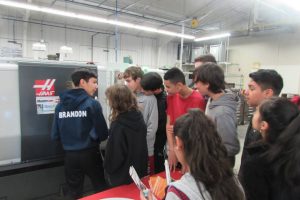