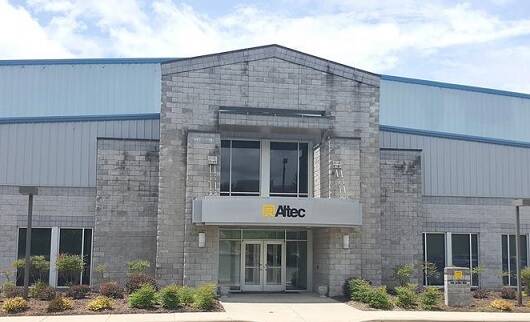 Nestled behind the Pike building by the Mount Airy/Surry County airport is a big operation with a name that is known, yet many struggle to pronounce. The Altec Industries logo is splashed on the side of work trucks all around the area, whether they be the TruGreen spray trucks or the familiar Asplundh crews cutting limbs off power lines.

A big contributor to the local tax base and a major employer in the area, Altec has been family-owned in Birmingham, Alabama since 1929. The Alabama Truck Equipment Company (Altec) has been manufacturing and finishing facilities across the country as they assemble and customize the working fleets that companies depend on.

The Altec facility in Mount Airy is a multi-unit operation with several divisions of Altec located under one roof. General Manager of Mount Airy Operations Ben Simmons said that with seven profit centers on one campus, space can be tight.

He made his comments during a recent tour of local facilities by the Surry County Board of Commissioners.

Inside the cavernous facility headphones and safety, goggles adorned the commissioners as they were guided through the building. In orderly work, bays were vehicle chassis waiting for components with workers attending to each.

In Mount Airy, Altec is making spray trucks and cable hauling trucks, but they also are finishing items manufactured in other locations. The same works in reverse, “We often cannot send to final assembly as much as we manufacture on site,” Griffin said. Having distribution centers and manufacturing spread across the country helps them stay nimble and responsive.

One of the two North Carolina Altec service centers is also located here. Offering service after the sale on repairs, and even further up fitting or customization can be done right here. “We try to surround the customer and give them everything they need,” Griffin said. Any manufacturer’s truck can be upfitted, and Altec has been known to fix their competitor’s trucks as well.

Weaving around racks four to five high of parts and Honeywell boxes, the tour lingered as a dozen adults got belly up to the window of a giant paint machine so they could watch paint dry. It would seem the wonderment with big toys does not go away with age.

To that end, the description of a new powerful laser raised an eyebrow or two. Innovation is key to an industry leader, so Altec acquiring and deploying a new 10kW laser that cuts steel at five times the current speed is something worth noting.

Innovation also means culling the herd and therefore some product lines made locally will be phased out over time. As the business needs dictate, their focus will shift to where the market drives business. The future for Altec remains bright though as Griffin pointed out their growth in overhead cabling trucks and buried cable as well.

Commissioner Eddie Harris asked if burying cables may hurt Altec’s business as many towns and cities across the county have a problem with aging power systems, and overhead power lines contribute to that problem.

Griffin acknowledged, “We have wondered if the cable machines may become irrelevant, but it hasn’t happened. With so many power lines overhead, this will take a long time.”

The future for Altec was of interest to Commissioner Larry Johnson, and Griffin described having the permits in hand and being ready to “start moving dirt” on an expansion. As busy as they are, every inch of space in the facility is in use. Griffin has plans to move some of his parts and distribution to another part of the campus to allow for more manufacturing space.

Having the workspace they need will be critical to growth for Altec, but having the right people on staff is also critical. County Commissioner Van Tucker was curious as to what sort of relationship they have had with Surry Community College. SCC not only offers skills training that in areas of need such as welding, but also in “soft business skills” for managers and team leaders too.

“The workforce here is conducive to what we need,” Griffin said of the local labor pool. Altec draws the majority of its more than 200 employees from Mount Airy, King and Winston-Salem but a surprising 20-25% is estimated to be from Southern Virginia. “It has been great, I feel like we have gotten a lot from them,” he said of SCC.

Running two daily shifts at their facility, Altec is trying to make theirs a worker friendly environment. Plant Manager Mike Reed said right away employees can tell a difference, “You won’t be turning a wrench on day one.” Rather, learning about the culture of the company and what they stand for takes precedence. “If you don’t know who you’re working for, you can’t deliver.”

Learning the culture means appreciating the past, which suggests to the customer that attention to quality is of concern. The good people of Pre-Delivery Inspection take the spray truck, the cable hauler, the chippers out for a shakedown cruise before delivering to the end user. No surprises will be awaiting the recipient of a new backyard digger derrick from Altec.

When Altec trucks roll off the line, they are ready to work, the company said. TruGreen, Pike, Asplundh, Exelon Baltimore Gas & Electric, or whomever the customer they can be confident in their new purchase because of the people in Mount Airy – or any other Altec location – who put it together.

When executing models built around safety and customer satisfaction, everything else “takes care of itself,” Reed said.

Just remember this, as thec ommissioners were told on their tour: The state where the company was born is not called “All-abama” it is called “Al-abama” and their company is therefore Altec and not Alltec. 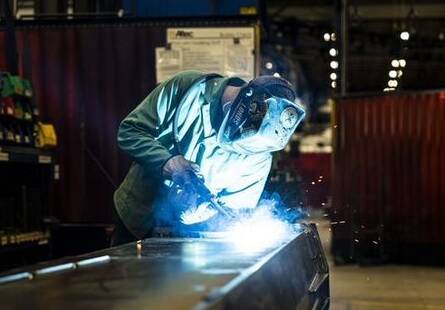 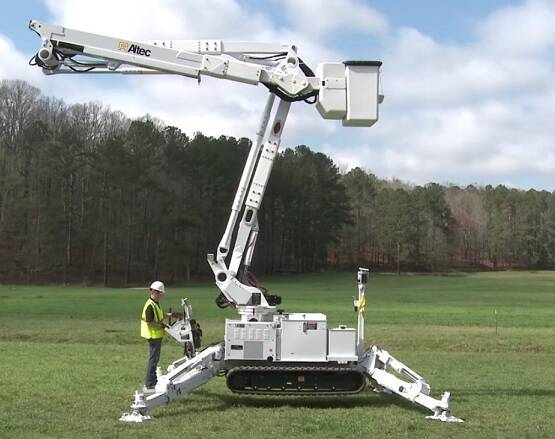