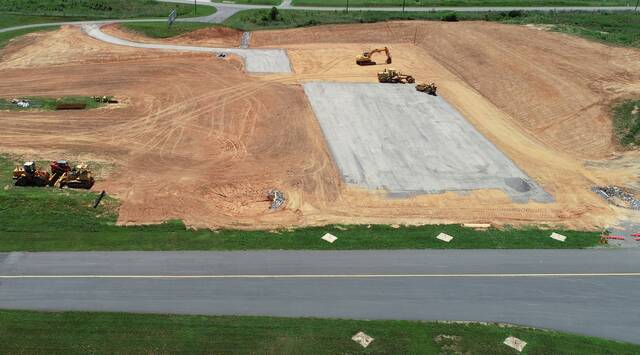 The money didn’t drop out of the sky to aid Mount Airy/Surry County Airport — but from N.C. Board of Transportation, which approved $1.38 million in state funds to complete a much-needed project there.

This occurred during a meeting of the board earlier this month, when more than $27 million was awarded to 13 different airports across North Carolina to improve safety and customer service.

The $1.38 million landed by Mount Airy/Surry County Airport will be used to complete a full parallel taxiway at the facility.

“We are one of the only airports in North Carolina that has large base jets that does not have a complete full taxiway,” Crater added Monday afternoon.

A parallel taxiway typically is a path for aircraft which connects a runway with aprons, hangars, terminals and other facilities. This allows planes to vacate the runway quicker, permitting others to land or take off in shorter time frames.

The taxiway work began at the local airport about two years ago.

“We are very pleased to get this,” Crater said of the $1.38 million in state funding to complete the project.

In addition to local officials, the 800-foot addition to the airport’s parallel taxiway has been deemed a safety priority for the N.C. Division of Aviation, a unit of the state Department of Transportation.

It is part of ongoing expansion plans at the airport which have been underway in recent years, including lengthening the runway from 4,300 to 5,500 feet. This was done to accommodate larger planes and better serve corporate clients.

Along with users of the facility, improvements at the airport are being applauded by Mount Airy officials, including Mayor Ron Niland.

Both Niland and Commissioner Jon Cawley are the city’s representatives on the seven-member Mount Airy-Surry County Airport Authority, which oversees the facility’s operations.

Niland said during a recent council meeting that based on one he and Cawley had attended as members of the authority the airport is moving forward and those administering its operations are doing a good job.

This includes growth plans that mirror the airport’s presence as a key economic development tool for the community.

The general aviation airport experiences 25 to 30 takeoffs and landings of jets per week, according to information presented at the council meeting.

It was mentioned then that new hangars and business were being sought for the airport, which at that time had six jets based there with the possibility of two more.

Cawley pointed out that there were nine people wanting to park their planes at the Holly Springs facility, but hangars were lacking for them.

The airport authority has been considering how to solve this issue, since having planes based at the site translates into tax revenues that are healthy for the county’s economy.

Money for airport improvements comes from aviation fuel taxes, according to city officials.

North Carolina’s 72 public airports serve as vital economic engines connecting people and business enterprises with the world, based on information from the N.C. Board of Transportation.

Airports and aviation-related industries contribute more than $61 billion to the state’s economy each year, according to the 2021 State of Aviation report. They support 373,000 jobs, generate $2.5 billion-plus in state and local tax revenue and provide more than $15 billion in personal income.