Citizen of the Year Award takes a turn 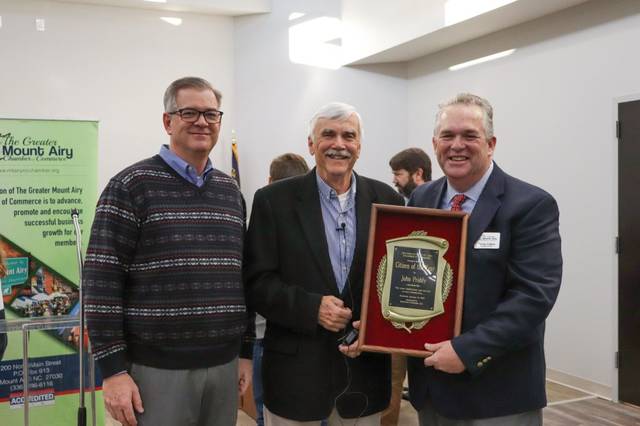 The fate of Greater Mount Airy Chamber of Commerce’s highest award took an unexpected turn when it became known the award recipient wouldn’t be attending the ceremony intended to honor him.

The recipient of the Chamber’s Citizen of the Year award is a closely guarded secret until the award is announced at its annual meeting each year, and as a result of that secrecy, some maneuvering is required by Chamber President Randy Collins and the chamber board, to insure the award recipient will be present.

This year’s recipient, John Priddy, however, could not attend the event Thursday night.

“We discovered that John was going to be out of town for his daughter’s wedding in Florida,” said Collins.

The award was presented to him at the new headquarters of Mount Airy City Schools after a Surry Sunrise Rotary meeting there on Jan. 16 by Kendra Clabo, representing Workforce Unlimited, sponsor of the award.

“He was very surprised,” said Collins.

“He was shell-shocked and speechless,” said Dr. Travis Reeves, Surry County Schools superintendent and one of Priddy’s nominators.

That award ceremony was videotaped, and the video was played at the Chamber’s annual meeting at Cross Creek Country Club on Thursday to a mostly surprised audience.

As to how the secret of Priddy’s award ceremony had been kept sucessfully under wraps, Reeves said, “We swore everybody to secrecy. Maybe it was out of respect to John. I like to think it was that.”

“John is what I consider a servant-leader,” added Reeves. “He leads with his heart and gives a shining example for others to follow.”

“Through my relationship with John as chair of our foundation board, I know that he has given countless volunteer hours to the foundation and has done a lot of behind-the-scenes work. He also volunteers in our schools, works with many students on business projects, and goes out of his way to help students. He is passionate about helping students understand credit, to understand college debt is real, and to help them find ways to circumvent it.”

He’s not out for accolades or credit,” continued Reeves. “He has given his time and energy for over 40 years. That’s worth recognizing.”

“John Priddy has been one of the most unsung heroes in Mount Airy,” said Kate Appler, district administrator for the Guardian ad Litem program in Surry and Stokes County and a member of Mount Airy Board of Education, as well as being one of the people who nominated Priddy as Citizen of the Year.

“I worked with John most on the United Fund, but he has worked quietly and under the radar on countless committees and countless boards. He has touched so many people in so many ways as a volunteer,” added Appler.

Priddy was president of United Fund of Surry twice and chairman of the campaign in 2004-2005. He was a member of Jaycees from 1978-1984, serving as president and getting the Club’s Distinguished Service Award. He served on the Yadkin Valley Economic Development District and was vice president of planning and evaluation in 1982 In 1984, he served as fundraising chair of the $1 million renovation and first indoor pool for Reeves Community Center. He also served as chair during his 20 years on the Reeves board.

Priddy served on the board of the Salvation Army for more than 25 years and was chairman of the board. He has served on boards for Habitat for Humanity, Surry Friends of Youth and Homebuilders Association, as well as co-chair and fundraising chair of the original Crime Stoppers for Mount Airy/Surry County. He is a member of Surry Sunrise Rotary.

Most recently he has been involved with Surry County Economic Development Partnership, serving as chairman, and recently finished serving on their executive board.

Priddy also was a basketball coach for 10 years. His son, Stephen, carries on a legacy of coaching as the longtime head of Surry Central’s wrestling program, including conference champions this season.

“John Priddy represents the very best in our community. He has a servant’s heart and a passion for helping others. We are pleased he was selected as Citizen of the Year,” said Collins.

“Okay, you got me. I was surprised,” said Priddy on video aired Thursday night. “That was a surprise. I love this community, and I definitely love my family.”

As to why Priddy volunteers so much, he said, “I like being around folks who have the same heart.”

John Priddy grew up in Danbury and graduated from Guilford College with a Bachelor of Arts degree in economics. He married Sandra Keaton in 1968. They have three children, Stephen and spouse Bretta, Corey and spouse Michelle, and Megan and new husband Andrew Hock. John and Sandra have four grandchildren; Logan, Ella, James and Rachael.

Priddy started his career with NCNB Bank in Mount Airy in 1977. In 1983 he went to work with United Savings. His bank then merged with BB&T. He was transferred to Elkin in 1998 as the city executive and then moved back to Mount Airy in 2000 with the title area executive for Surry, Alleghany and Wilkes Counties. He retired from BB&T in 2015 as the senior vice president, area executive after 32 years of service with BB &T. 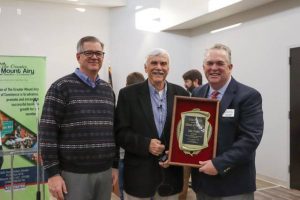