Northern Regional Hospital has unveiled plans for major projects costing an estimated $11 million, including the addition of a medical office building, parking deck and other facilities.

This emerged during a presentation to the Mount Airy Board of Commissioners at a meeting Thursday afternoon, when city officials were asked to close a section of Worth Street near the hospital as a safety measure linked to those plans.

The changes in store for the Rockford Street facility — which opened in 1957 — represent 16 months of study and reflect “where we are going for the next 20-plus years,” hospital President and Chief Executive Officer Chris Lumsden stated.

“We are very excited today to be able to present this plan to you,” Lumsden said of the overall campus site study containing various elements, which meets one of his goals when becoming CEO nearly three years ago: growing the hospital.

Mayor Pro Tem Ron Niland mentioned Thursday that it is now the largest employer in Surry County with more than 1,000 people on the payroll.

The project announcement came in the wake of action last month by the commissioners to rezone five separate parcels of hospital land on South South and Worth streets for Medical Business use.

One highlight of the master campus plan — to be done in phases — is the construction of a 25,000-square-foot medical office building on South Street just west of the main hospital site.

It also the costliest, with a price tag of $8.25 million. The construction is scheduled to begin this fall and be completed in the spring of 2023.

“We are moving very quickly to secure pricing for all phases of the project,” said Lumsden, since construction costs are increasing.

Though not included on the list of items presently pursued, Lumsden said that at some point another 40,000-square-foot building is to be constructed to accommodate specialty services.

While more office space is an objective of the expansion effort, Lumsden said safe and convenient accessibility to Northern Regional Hospital is another — “which is a challenge for some of our patients and employees.”

Toward that end, a parking deck costing $2 million will be built on property near the corner or Rockford and South streets above a portion of an existing surgery center parking lot.

The one-level deck is to contain 70 spaces. Work on it is slated to start in February or March of 2022 and be finished in December of that year.

Another parking addition will involve the development of an on-grade lot south of the surgery center, providing another 50 spaces. Work on this phase is to begin in July or August and be completed in December.

About 375 new parking spaces will result from the different projects, according to Lumsden, who said this is “really needed.”

Another facet of Northern Regional Hospital’s growth package is focused on the redevelopment later this year of its north campus along Worth Street, where a helicopter landing and takeoff site is located.

“Most important is it will create a safer environment for our employees and patients and visitors,” Lumsden said.

In conjunction with the north campus phase, Lumsden asked Mount Airy leaders Thursday afternoon to close the portion of Worth Street between the intersections of Rockford and South streets.

He said safety is the prime motivation there, adding that the hospital would have sought closure even without the redevelopment plans. “Because it’s a dangerous situation.”

The present setup includes a painted crosswalk on the pavement and signage directing motorists to stop as people cross back and forth between a parking area and the hospital building.

“But the sign gets run over and has to be replaced,” the hospital CEO said.

“The vast majority of vehicles that use Worth Street … exceed the speed limit,” Lumsden added. One driver passing through was clocked at 51 mph.

This is coupled with the findings of a recent one-week survey showing that about 750 crossings of Worth Street occur per day, including ill or injured persons ferried across it to medical helicopters for trauma center transports.

“That’s not good — that’s not safe,” the hospital official commented.

The Mount Airy Board of Commissioners took the first step toward the Worth Street closure Thursday afternoon by giving unanimous approval to a resolution of intent for that and setting a required public hearing for next month on the proposal.

City Planning Director Andy Goodall, who outlined this process Thursday, said the closing of the section of the street in question probably will draw little or no opposition since the hospital owns most of the property abutting the roadway.

Because the street is on the state highway system, the closure must be approved by the N.C. Department of Transportation along with municipal officials. That also is not viewed as an obstacle, based on discussion at the meeting. 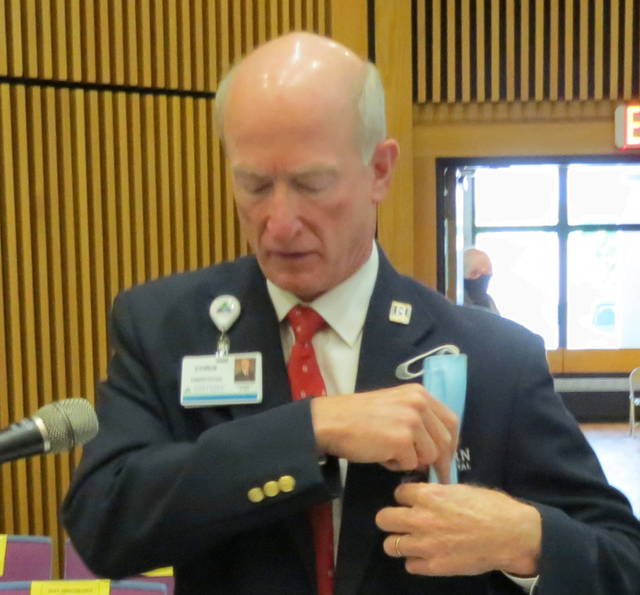