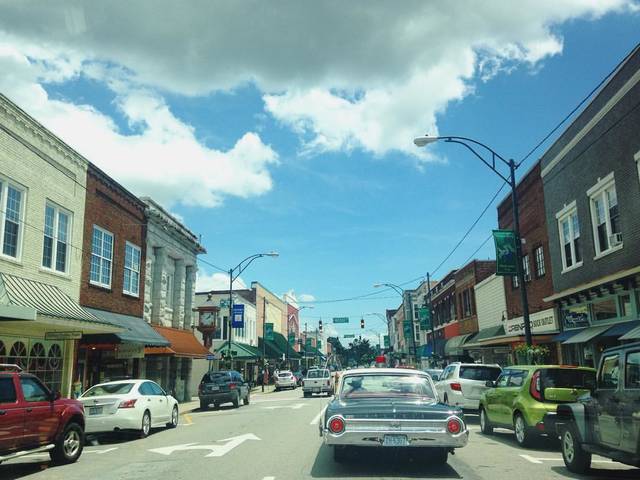 Facing formidable competition from the likes of a mansion, a warship and the natural wonders of mountains and seashore, Mount Airy Main Street prevailed as North Carolina’s number one attraction in a USA Today 10 Best Contest that was released at noon on Friday.

“This is so exciting for businesses in town and for the city,” said Jessica Roberts, executive director of the Mount Airy Tourism Development Authority (TDA). “We are very proud to be named number one in North Carolina, and this media exposure will be wonderful for the city of Mount Airy.”

“It was a real grassroots effort to get the word out locally and to our fans around the world; fans of Mount Airy and fans of ‘The Andy Griffith Show’,” said Roberts of her agency’s campaign to earn votes for Mount Airy downtown.

“I’m just tickled to death,” said Travis Frye, programs and events director for the Greater Mount Airy Chamber of Commerce. “I was kind of in shock. We were up against Biltmore and all those others.”

Frye added that coming out ahead of those heavy-hitting attractions is a reflection of the spirit of the local community.

It wasn’t easy, and it wasn’t always a sure thing. During the final weeks of voting in the reader’s choice contest, Mount Airy had dropped down into third place, temporarily bested by Biltmore and some of the other contenders as voting progressed.

“We watched what they were doing, and then we did more of it,” Roberts explained how she and her team took advantage of that time while lagging behind the frontrunners. “We sent out texts, emails, posts on social media: Facebook, Twitter, Instagram. We asked the Chamber to help, talked to different people and businesses locally so they were all doing what we were doing.”

This is not Mount Airy’s first time at the rodeo of public opinion. Several years ago, the city was one of six finalists competing for the title of Friendliest City in America. The results of that competition did not turn out so well for Mayberry, with Walla Walla, Washington, ultimately named the winner. But the experience did not go to waste.

“When we were nominated for ‘friendliest city,’ right away we put together a plan for media exposure to let the media know we were in the running,” said Roberts. That plan has been honed and sharpened over the years in subsequent campaigns, and on Friday it paid off.

“I think being named number one in the category is huge exposure for us,” said Roberts. “We could never pay for this kind of publicity.”

“We try to get people to come, and then we try to get them to stay longer and spend more money,” said Roberts of the efforts of the TDA. “Anything a tourist touches while they are here helps the local economy.”

“This is an opportunity for us to come together as a community,” said Frye of the latest accolade bestowed on Mount Airy by a national publication.“People still long for that small-town feel,” he summed up. “And we’ve got that.”