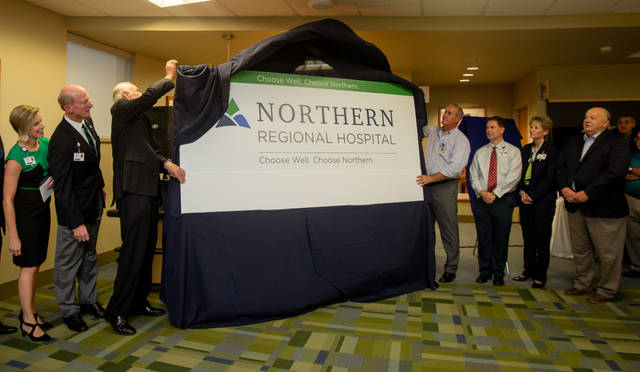 Northern Hospital of Surry County is no more.

At least the name no longer exists.

The hospital itself is still standing, under the same management, same ownership, but with a new logo and name — Northern Regional Hospital — to better reflect the hospital’s emphasis on reaching a wider market.

Chris A. Lumsden, president and CEO of the hospital, said the rebranding is really meant to align with the hospital’s purpose: “To provide quality affordable health care to the region,” he told more than 200 people gathered Tuesday night for an unveiling ceremony at the Mount Airy facility. “Not to a part of the county. Not to the county. But to the entire region.”

Lumsden, who assumed his post with the hospital 14 months ago, said the hospital contracted with a firm to do a market survey over the winter and into the spring months. That consisted of 400 telephone surveys and more than a dozen in-depth focus groups, reaching out to people throughout Surry County and contiguous counties.

The survey probed what people thought of Northern Hospital, what was the primary medical facility they used and why they used it.

“We found that people who had used us loved us,” he said Tuesday night. “The people who use us, almost across the board, have very outstanding things to say about our hospital or our system,” he added during separate comments outside Tuesday’s ceremony.

Those who didn’t use Northern, he said, largely didn’t know about the hospital.

”They didn’t have bad things to say about us, they just don’t use us. They don’t know us very well, they don’t know our history, our scope of clinical services as well as they should. That made us think about future strategies going forward, aimed at how do we grow, not only as a health care provider but as a economic engine for this area.”

Already, Lumsden said the hospital had been attracting more people from the region as it expanded medical services it offered.

“We’re already regional,” he said prior to Tuesday evening’s ceremony. “It’s just that few people view us as a regional hospital because it’s a county hospital…many folks outside of the immediate community just haven’t been exposed to what all the hospital can offer.”

That led to months of consideration, working, and, ultimately, the rebranding unveiled Tuesday.

“This isn’t the answer to everything,” Lumsden said. “This is a springboard for greater things to happen further down the road.”

“Our comprehensive rebranding campaign has been received very positively by our physicians and employees, and we are confident that our patients and other members of the community will enthusiastically embrace our more accurate identity, as well,” said Ashly Lancaster, director of marketing for Northern Regional Hospital. “We are excited about the next-generation look and feel of our new signage, logos, and tagline – all of which will be introduced into the community over the next several weeks and months.”

Lumsden also shared with those gathered Tuesday that the 133-bed hospital was recently named to the “Top 100 Great Community Hospitals,” list compiled by Becker’s Healthcare Review, a service that ranks hospitals based on a wide range of factors, including patient care and safety, financial strength, and others.

“There are more than 2,400 community hospitals in America,” the CEO said. “That puts us in the top two percentile.”

Additionally the hospital has been named to the Top 10% in the Nation list for patient safety and medical excellence by CareChex, and the hospital earned the federal government’s Centers for Medicare and Medicaid Four Star Designation.

Although its name has changed, Northern Regional Hospital will continue to function under its legal business name, Northern Hospital District of Surry County with the same management team in place.

“Northern, that name, does have a legacy here, does have some respect,” he said of how hospital officials decided upon the new name. “We just added the regional part because we are a regional hospital.”

Now, he said, the name reflects that, and a new marketing campaign will hopefully take that message to the counties surrounding Mount Airy.

Tuesday night, Lancaster unveiled a commercial which will be airing on area television stations, as well as explaining the new logo and adding the tag line: “Choose well. Choose Northern.” 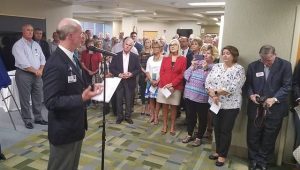 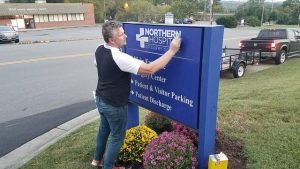