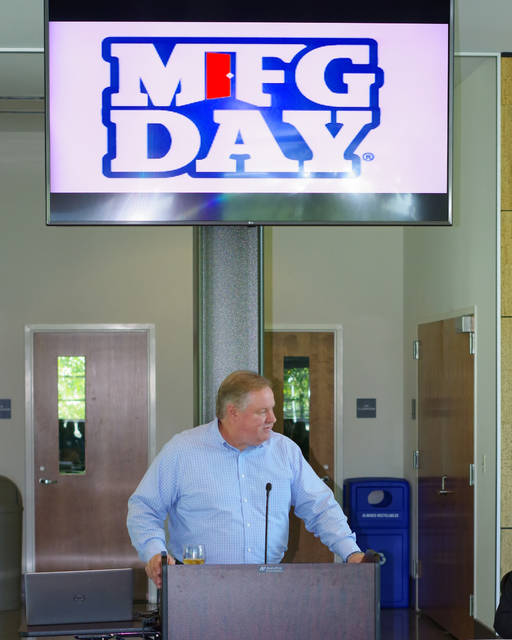 DOBSON — In 5-10 years, 60% of working adults will need some kind of post-high school training in the workplace.

That’s the viewpoint of Peter Hans, president of the N.C. Community College System, who spoke to manufacturers at a luncheon Friday.

Todd Tucker, president of the Surry County Economic Development Partnership, said it was no surprise that the group was holding this National Manufacturing Day luncheon on the campus of Surry Community College. A cost-effective education is invaluable to manufacturing, he believes.

Dr. David Shockley, SCC president, said it is important that people supply good opportunities to their children and grandchildren.

There are great quality-of-life jobs right here in their community that they don’t know about or understand, Shockley said of today’s students. He was glad to look around the room and see public school partners as they and himself can work together to help lead children toward those good opportunities and help them to become future leaders of this county. They will contribute to the economic well-being of Surry one day.

“It is all of our jobs to make sure we maintain this. So thanks for coming out for this day,” Shockley said.

Shockley introduced Hans, saying he was a graduate of UNC-Chapel Hill with a master’s degree from Harvard.

Hans said that yes he has college degrees himself, and that is a great option, but there are many other paths students can take to prepare for the workplace.

He applauded the relationships that SCC has formed with manufacturers because they can open students eyes to pathways that they may never have considered. And they can pursue these fields without the large student debt that can come with four-year schools.

More than 40% of Americans now have some sort of high-value credentials beyond high school, he said. And there is a need to get that above 60% in the next 5-10 years. He told the audience to notice he didn’t say 4-year degree, but high-value credentials beyond high school, which could include a two-year degree or a technical/vocational certification.

Sen. Deanna Ballard, whose District 45 includes most of Surry County, was in attendance. Hans gave thanks to Ballard and Sen. Phil Berger, whose District 30 covers the rest of Surry. Hans said the two senators have shown their support for education.

He said during one conversation with Berger he was explaining how a community college welding class was only being funded at two-thirds the rate of a university sociology course, despite the vast increase in cost (such as machinery and supplies) necessary to teach welding.

He said Berger instantly understood the problem and answered, “But we need more welders than sociologists.”

“We’re an enrollment-based funded institution,” said Hans. So, when students take more classes, the college can get more funding. When manufacturers make use of the community colleges, the colleges can offer greater variety of courses.

Surry County has a lot of competitive assets here that Todd Tucker is selling to outside companies, said Hans.

Manufacturing jobs today, he pointed out, these are not the mills of folks’ grandparents, but rather offer sophisticated machinery and better pay. Companies and colleges are working to change perceptions and awareness.

“There are multiple paths to success,” he said.

After his speech, Hans took a question from the audience.

What about when a company doesn’t want to wait two years for a good candidate to get training, but would rather have eight weeks or 12 weeks of training, then the employer can train on the job from there?

“I think that is the future of education, shorter term acquisition of skills,” he said.

One of the problems with how state officials view community colleges, he said, is “we’re being judged on graduation rates.”

The idea of education is to prepare young people for adulthood and a career, he explained, and if that can happen in less than two years, then the school has done its job. A graduation rate doesn’t capture the profile of the students.

Shockley chimed in to say the college spent $20,000 recently to offer a truck driver training program; the course created enough certified drivers to equal $2 million in potential job earnings when they get hired. 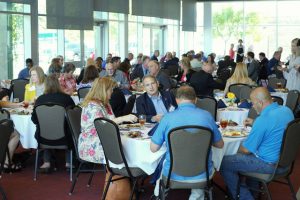 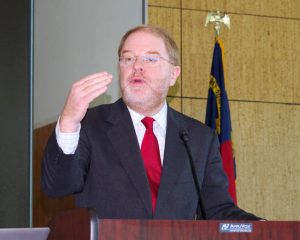