Socks appeal: How Mount Airy’s Renfro is targeting the movement for fashion footwear 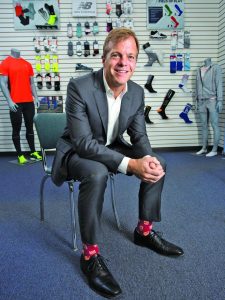 Stan Jewell remembers the days when consumers viewed socks as a mere afterthought — an item haphazardly tossed in the shopping cart on the way to a more important purchase.

“It was ‘do I need my white socks or my dress socks?’” said Jewell, the newly minted CEO of Mount Airy-based Renfro Corp.

But today, buyers see socks as a fashion statement, he said. And they’re willing to spend more than just a few bucks for the fancy footwear emblazoned with elaborate graphics, designs and patterns. Hiker friendly socks that provide blister protection and resist odor-causing bacterial buildup? That’ll be $22.50. A pair of cashmere-merino wool blend socks with a classic ribbed pattern? $58, please. Compare those prices to a six-pack of men’s big and tall crew socks from Walmart for $7.47.

Indeed, there is a movement afoot to provide consumers with socks featuring various fashion designs or high-tech fabrics that promise better comfort or performance for a specific activity like running. That trend, in turn, has provided fertile ground for startups focused on selling socks marketed with words like “fun,” “novelty” and “premium.” The trend has forced sock manufacturers like Renfro Corp. — whose strength has been their ability to produce mass quantities of socks in traditional channels such as department stores — to look at their sales strategies with fresh eyes and add specialty niche socks to generate revenue and stay competitive.

That’s been a top priority for Jewell, who this summer took the reins at Renfro, a global manufacturer of private label legwear products. Jewell is focused on growing market share of brands like New York City-based HotSox, which features sock collections featuring everything from Van Gogh paintings to Scottie dogs. Some manufacturers, like Mount Airy-based Nester Hosiery, are hiring new executives to boost sales for premium sock lines. Others, such as ProFeet in Burlington, have launched new hosiery to appeal to consumers who love the outdoors. Some are even partnering with sock startups to provide production capabilities and earn a cut of the profits.

The fight for sock market share is taking place clear across the Triad, which is home to a crowded field of sock producers. Take, for example, the small city of Mount Airy, with just over 10,000 people. Mount Airy is home to Nester Hosiery, a high-end sock maker in the premium performance sock category, and has also long hosted a sock operation for Winston-Salem-based Hanesbrands. Look farther south to find Greensboro-based Kayser Roth, a hosiery manufacturer that operates plants in Burlington and Asheboro. And manufacturer Harriss & Covington, a producer of SmartWool socks, is based in High Point.

Sock companies here and across the country are pursuing the premium socks trend to help them generate revenue in an industry hard-hit by the shift to overseas manufacturing.

“We are trying to balance our portfolio a little bit more because the basic category of light gray athletic socks is shrinking,” Jewell said of Renfro, which makes socks for the likes of Fruit of the Loom and Walmart.

The company, which employs about 500 of its 4,500-person workforce at the company’s Mount Airy headquarters and distribution center, isn’t willing to depend solely on volume production alone.

“We’re still the biggest player in that market, but we are trying to grow our more interesting segments of the business in the performance and fashion category faster,” Jewell said.

The good news is that there is still plenty of money to be had: The global socks market was valued at $42 billion in 2016, and it is expected to expand at a compounded annual growth rate of 6.7 percent from 2017 to 2025, according to Transparency Market Research of Albany, N.Y.

The companies able to sell lines of socks that can be differentiated will be the winners in the uber-competitive category.

“Now that you can charge more and get more for it, no longer is the low-cost manufacturer in control,” said Roger Beahm, a marketing professor at Wake Forest University. “Now, when someone is looking at a pair of socks, they are looking at what’s the value-added? What am I getting that I might not normally get in another pair and does it add value? Is it the decoration? Is it the sock itself? Or a technological ingredient that allows the sock to perform better? Does it better reflect my lifestyle? Does it help me escape? Those are values that are being delivered now.”

He added that socks are also seen as an “affordable luxury.”

“You can pay $16 for a pair of socks. While that’s expensive compared to what a commodity sock would be, it’s still not going to break your budget,” Beahm said.

Jewell’s ability to generate new revenue for the company through specialty socks will be imperative to the longevity of Renfro, which is owned by private equity firm Kelso and remains one of the largest manufacturers of private-label socks for retailers like Walmart, Target and Kohl’s.

Founded in 1921, the company derives about 50 percent of its annual revenue of $500 million from the traditional sock business. That’s down from a portfolio that previously relied almost entirely on the basic sock category, Jewell said. The remaining half of Renfro’s business comes from sports, outdoor and workwear performance socks and fashion, high-end socks, Jewell said.

Jewell said Renfro’s non-basic categories of performance socks, such as New Balance and Nike athletic socks, currently make up 20 percent of the company’s overall business while fashion socks, like Polo/ Ralph Lauren products, make up about 30 percent. He estimates that the fashion sock category will grow to about 35 percent over the next five years while performance socks will grow from 20 percent to 30 percent.

He said he sees plenty of potential for fashion-oriented socks, which are often bought by those who want to add some personality to one’s ensemble and express one’s interests and tastes.

“I don’t have to think of some new combination or style of pants or shirts,” Jewell said. “I can put a new pair of socks on that is pushing my fashion sense a little bit, but it’s not a big risk, it’s not a big expense.”

Other consumers want to make a deliberate statement, he said.

A display shows off Hot Sox, which are manufactured at Renfro.

Jewell plans to generate more money from fashion-oriented socks largely by enhancing the marketing of companies Renfro has bought over the past decade. In 2007, it bought New York City based HotSox, whose main sock customer is Ralph Lauren, followed by the acquisition of California-based K. Bell in 2010. In 2014, Renfro struck a license agreement with New Balance to design, manufacture and market new and existing lines of socks for the athletic apparel brand.

“When we took over the New Balance license, there wasn’t traditionally very close cooperation between the sock manufacturer and the New Balance parent company,” Jewell said. “So we’ve worked really hard to build a stronger connection, and we have aligned our product categories directly to their shoe category, so that’s new. And we are designing socks to go specifically with footwear products they are designing.”

Jewell isn’t worried about the sock startup competition. If anything, it helps Renfro, he said.

“We are learning a lot from watching those guys and seeing what’s really sticking,” he said. “That helps inform us on what our strategy should be and how we move forward.”

He added that Renfro has the ability to scale up quickly if there is a sudden spike in demand for specialty socks — something startups can’t do as easily.

“They are really going to have problems scaling up, either with capital issues or distribution,” he said.

That’s Renfro’s strength, Jewell said. It is equipped with a total of four factories, two of which are in the U.S. and are 100 percent owned by the company: A facility in Fort Payne, Ala., is used for mass production of basic socks while a facility in Cleveland, Tenn., focuses on specialty socks. The company is also part of joint ventures in both China and India that allow Renfro to mass produce socks for companies like Walmart.

“When Walmart comes to us and says ‘we want to focus on ‘Made in the USA,’ we have the ability to do that and do it in our own factories here,” Jewell said. “We don’t have to try to piece it together or outsource it.”

Meanwhile, small companies often outsource manufacturing operations, he said. While some of the firm’s larger competitors have factories, they are typically not in the U.S., Jewell said.

He added that Renfro has an advantage over sock startups because of its longstanding relationships with department stores.

“It’s very expensive to sell to department stores, when they want to charge back for unsold inventory and returns,” he said. “Small companies just can’t afford to do a lot of business with Macy’s or Dillard’s.”