The proposed transformation of former Spencer’s industrial property into a boutique hotel has moved closer to reality through action by city officials — setting the stage for another upcoming vote committing millions in public funds for the venture.

A key move toward that end occurred Thursday night when the Mount Airy Board of Commissioners gave unanimous approval for a redevelopment agreement between the municipality and a private group known as Sunhouse Hospitality, LLC.

“I think this could be a really important step in Mount Airy’s future,” Commissioner Tom Koch said of the pact to develop the hotel in the Sparger Building, a large multi-storied structure fronting Willow Street.

Sunhouse, a business in Cary which now owns and manages Hampton Inn by Hilton on Rockford Street, also is seeking to locate a convention-type market center including meeting space in an old dye house portion of the Cube Building nearby. Sunhouse plans to use historic tax credits available for refurbishing dormant textile mill properties.

The Cary firm has an option to buy former Spencer’s sites now owned by the municipality for $350,000 and will invest at least $10 million in the redevelopment effort, based on its deal with Mount Airy. The agreement calls for the hotel to contain 70 to 80 rooms and operate under a national brand.

Thursday night’s vote approving the arrangement between the city government and Sunhouse did not include appropriating any taxpayer funds — which Mayor Ron Niland said after the meeting will occur during an upcoming council session.

“This will be the actual budget with the actual figures,” Niland said of funding Mount Airy informally has agreed to provide for infrastructure needs at the project site the municipality has owned since 2014, where industrial production ceased in 2007.

Those costs — including an estimated $1.63 million to provide parking spaces there — have been put in the $3 million range altogether, with a public park, lighting and landscaping also proposed.

Niland said the exact figure is unknown at this point. “The (city) staff is fine-tuning numbers,” the mayor explained.

Surry County officials have committed $1.5 million toward the infrastructure needs for the project expected to produce at least $1.6 million in property tax revenues during just the first six years after the hotel/market center emerges.

The mayor said the upcoming vote will formalize what already has been discussed for months with no surprises anticipated once the costs are pinpointed.

Another action was taken Thursday night to aid the project along with the redevelopment agreement decision.

This included a vote to replace a 400-foot municipal water line along Willow Street from Oak to Franklin streets near the Sparger Building.

Although this is projected to cost $140,000 to $170,000, Niland said $180,000 in state funding appropriated for recently completed water-sewer work in the area of Merritt and Maple streets “coincidentally” was leftover.

That surplus money must be used or returned to the state, added Niland, whose idea for delegating it for the line replacement was embraced by the commissioners.

“I think they’ve got permission from the state,” Williams said Friday concerning plans by Mount Airy leaders to reallocate the money.

The issue of asbestos in the former Spencer’s structures eyed for the redevelopment project at hand also resurfaced during Thursday night’s meeting. The timely removal of that cancer-causing substance once routinely used in the construction industry is deemed a “critical” first step in the hotel/market center plans.

Niland reminded that the commissioners had set aside $50,000 for such preliminary tasks through project ordinance and budget ordinance amendments OK’d in May.

“The asbestos that was found in the buildings was a little more than we had hoped for,” said the mayor, who mentioned that the private developers “kicked in” extra money for its removal. This will require no additional municipal funding for that purpose, Niland pledged.

All in all, Mount Airy’s commissioners seem happy about the present state of the Spencer’s reuse effort that has been plagued by various pitfalls over the years.

Their work included mounting an RFP (request for proposal) process which led to the interest by Sunhouse Hospitality during a pandemic period when such growth plans largely were stifled.

Commissioner Koch delivered a heartfelt thanks to those who moved the project along, with Commissioner Marie Wood offering similar comments.

“I don’t know that we can thank them enough,” Wood said of the Mount Airy Downtown contingent. “I’m really excited about getting approval for the development agreement.” 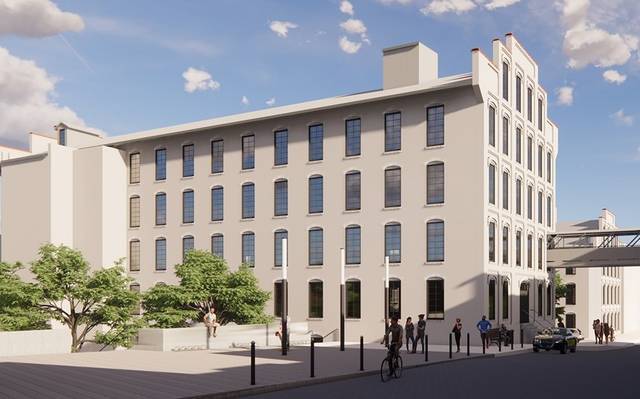