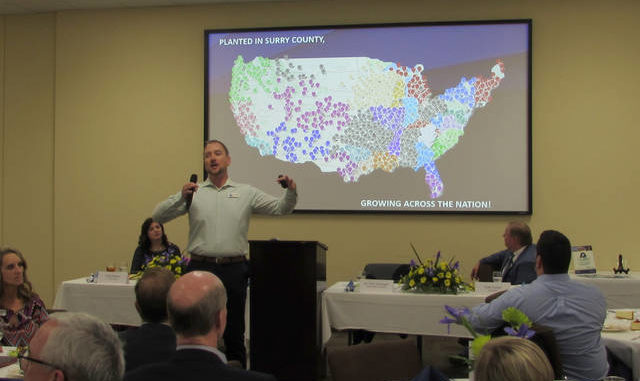 With representation from all parts of the county, all four municipalities, county government and the business sector, 155 people gathered in the government center’s meeting room, many of them for the first time.

“It’s an easy time frame,” EDP President Todd Tucker said of the Friday lunch time slot. “We get a lot done in a short time. People can come out and learn about business in their communities and network with other professionals and their peers.”

Chris Cartwright, president of Prism Medical Supplies, delivered the keynote address, detailing how the business he started in Elkin by himself in 2006 has grown from having six orders its first year in business to filling 383,641 orders in 2018, and projecting 420,000 orders for 2019.

The bulk of the company’s operations remain in Elkin, according to Cartwright, but now include nine distribution centers around the country and an additional office in Las Vegas, opened in 2016 to better serve clients as the company expanded its territory westward.

“Small business opportunities are alive and well here in Surry County,” said Cartwright. “The cost of living is lower than in major mets (metropolitan areas). Overhead and rent are less, and the support you get is impressive. If you’re trying to build a business, there is a positive connotation around that.”

Cartwright said there are a lot of people looking for jobs, a lot of people who want jobs, but finding people who are career-oriented is challenging. Not showing up for work is the main reason people leave his company. Turnover is three times higher locally than in the company’s Las Vegas facility.

The company is working to build an organization of career pathing and to create a culture where people connect with more than a job. One of the biggest initiatives of the company is to connect with the community.

Todd Tucker followed up by saying the partnership continues to work on its three core principles: working with existing industry and businesses, acting as a resource to small business and entrepreneurs, and marketing Surry County as a location for new businesses.

He cited 2018’s successes as ACC Coatings moving its location from New Jersey to the old Chatham No. 4 plant in Elkin and Steel Buildings and Structures purchasing 43 acres in Piedmont Triad West Corporate Park in Mount Airy where it plans to build multiple buildings and create multiple jobs. Sonoco Products, Choice Metal Buildings and Bobcat were also helped by the partnership to locate space in the county. 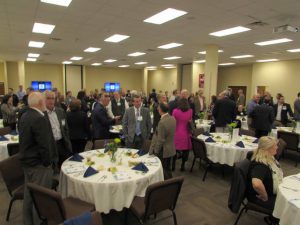