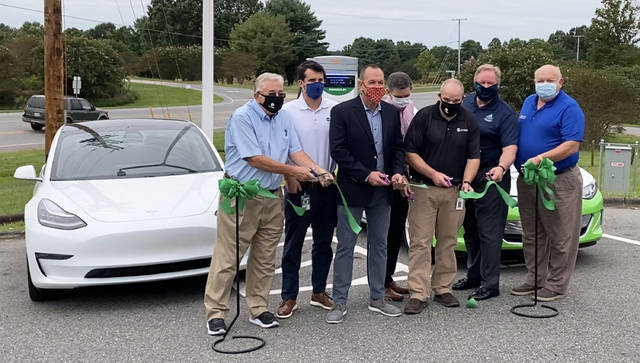 DOBSON — Area electric vehicle owners and those traveling through Surry County have a new way to quickly get a lasting charge. Surry-Yadkin Electric Membership Corporation, in partnership with Circle K and North Carolina’s Electric Cooperatives, the power supplier and statewide association for the state’s electric cooperatives, has installed and energized a new ChargePoint DC fast charger along the Interstate 77 corridor in Surry County.

Representatives of the partner organizations as well as area economic and county leaders gathered Tuesday, September 15, 2020, to cut the ribbon officially welcoming the new fast charging unit. The first of its kind for a 121-mile stretch of I-77 between Wytheville, Va., and Cornelius, N.C., the charger was installed and energized in July in the southwest corner of the Circle K parking lot on Zephyr Road at the I-77 Dobson Exit.

The fast charger can fully charge an all-electric vehicle in about 60 minutes, allowing the vehicle to travel about 300 miles for $27.

North Carolina’s electric cooperatives, including Surry-Yadkin EMC (SYEMC), have committed to continue growing an electric vehicle charging network in rural areas around the state. This fast charger is one of the units that is helping expand that network and is part of a $1 million investment the co-ops are making in electric vehicle charging infrastructure across the state. Eight of North Carolina’s electric cooperatives also were recently awarded funding through the North Carolina Volkswagen Settlement to install additional charging stations along major highway corridors.

Growing the EV network helps with NC’s Electric Cooperatives’ goal of reducing carbon emissions by 50 percent from 2005 levels by 2030 and being at net zero carbon emissions by 2050. This is part of a new Brighter Future initiative recently launched by the 26 North Carolina electric cooperatives, including

SYEMC, that aims to preserve the reliability and affordability of electricity while also achieving important sustainability goals.

The new EV charger has seen heavy use since it was energized, especially on the weekends. EV users can search for chargers on their online maps when traveling and planning trips, and the ChargePoint fast charger in Dobson is now appearing on those mapping systems.

This will mean a boost to Surry County’s tourism and economy. EV drivers will be able to make stops in Surry County, and while their vehicle is charging up, they can visit Circle K as well as other nearby stores and restaurants.

Circle K in Dobson is the first one in North Carolina to host a DC fast charger, and among the first locations for Circle K in the United States. Circle K is already a global leader in EV charging with stations in Europe hosting EV capacity. In Norway alone, Circle K stations have more than 450 chargers.

“This is the first EV charger in the Coastal Carolina Business Unit,” said Jill Peterson, fuel director for Circle K. “In this market, we are evaluating what impact EV charging capacity may have on our local business and driving traffic to our site. Our expectation is that we will see lift over time as adoption rates increase, and we look forward to helping all our customers fill their needs, whether for fuel or electric charging.

“We are excited to partner with Surry-Yadkin Electric on this project, and we look forward to seeing how traffic at this location may improve with the new option to our EV customers,” Peterson said.

“This is something big to celebrate,” said Travis Bode, key accounts and energy services coordinator for SYEMC. “We’re not only honored for ourselves and for Circle K, but for Surry County. It’s nice to know that here in Dobson, Surry County, a tenth of a mile from I-77, is the first one in North Carolina.

“It’s a nice boost for area businesses and for the county,” he said.

The EV charger project was a year in the works. SYEMC reached out to Circle K after an assessment determined there was a need for a fast charger along the I-77 corridor.

“It’s nice to work in a county like Surry County, where it’s not just us, it’s everybody. You’ve got county leadership, you’ve got corporate leadership, all working together for one common goal that fits everybody else,” Bode said.

“It’s important to increase EV chargers throughout the state,” Fitzgerald said. He added the importance of filling in the gaps in areas where there may not be a lot of EV use yet, but there will be in the future and this will encourage EV adoption because there will be places to charge around the state.

He also pointed out the chargers’ importance to economic development as drivers will stop in communities along their travels.

Surry County Commissioner Larry Johnson, chairman of the board of commissioners, also talked about the importance of the EV chargers. He foresaw a time when one charger will not be enough, and more will need to be added.

Prior to the installation of the EV fast charger, SYEMC had four Level II chargers on its system – two at the Fairfield Inn in Elkin, one at the Hampton Inn off Zephyr Road in Dobson, and one at the SYEMC headquarters in Dobson.

An additional Level II charger will be installed this year at the visitors center parking lot at Hanging Rock State Park. This will be the second installed at a state park by an electric cooperative in North Carolina.