Cycles and patterns in life happen, we frequently choose to look at them and dismiss them as a random coincidences. However, other times these cycles occur because it can be human nature to follow the path of least resistance and stay in unhealthy patterns. Such may be the case for those in the criminal justice system for whom it can be even more difficult to break the cycle of incarceration that, left unchecked, may find itself as the worst hand-me-down item between generations. Wayne Farms is entering a partnership with Surry County Sheriff Steve C. Hiatt in a new job reentry program that seeks to break the cycle of recidivism while filling staffing needs at one of the county’s largest employers.

Guinea pigs at a poultry plant

Certified Peer Support Specialist Sonya Cheek said, “This cannot work without assistance from the sheriff and Mr. Wooten at Wayne Farms.”“This is my community,” Matthew Wooten, Dobson Complex manager for Wayne Farms, said while posing for photos with Sheriff Hiatt, Cheek, and a phalanx from the sheriff’s office. When hearing of the program, it sounded like a no brainer to him, “I said ‘I like it, let’s do it!’” Wayne Farms has a history of being an active member of the community. He said he was not scared to be the “guinea pig” for this program, and they know there may be growing pains with Wooten joking, “Experiment on me.” “This is not a guarantee of a job, this is an opportunity,” he said, saying that these candidates will be treated like any others. Cheek has been granted unfettered access to Wayne Farms and will be the point of contact between Wayne Farms and the county’s work reentry program. She will have to ability to make ad hoc visits to their property to conduct onsite check-ins. “We have a responsibility to help Wayne Farms keep the employee,” she said, “not plug them in and forget about them.” That means complying with mandated follow-up and case management on a regular basis. Sheriff Hiatt pointed out that Insteel had approached him in 2019 about participating in a job reentry program, but the county was not ready at that time. Also, Leonard previously expressed some interest in participating as well. “The largest employer in the county took a chance – we want other businesses to participate,” Willis said of Wayne Farms. Interestingly, Forsyth County had reached out to Wayne Farms to do something similar and that sparked the idea for Wooten to reach out to Surry County and inquire about a similar program with Sheriff Hiatt.

Willis, the low-key directory of the county’s substance abuse response, admits he is “more of a systems guy” than anything else. The county needs his expertise on the admin side, he needs help from the likes of Cheek, Charlotte Reeves, and a bevy of volunteers. “I do not have the inside the bubble experience. It would be like me trying to empathize with childbirth.” When a 3 a.m. collect call comes in, it is answered by Cheek, one of the lynchpins in the county’s new job reentry partnership between the sheriff’s office and Wayne Farms. That process will be greatly simplified because Pay Tel, a private company that has released a tablet for use inside corrections facilities, will soon load assessments for work reentry onto the devices. They will contain a questionnaire for those inmates nearing the full completion of their sentence and who have a desire for employment. Inmates will be identified, and then pre-screened using the tablet. It is not hard to see the time savings if Cheek were to get an assessment back saying one inmate has heavy equipment experience, while another has the mechanical aptitude. She also said the tablets are slated to have some educational material added onto them as well, including substance abuse education.

Aces in their places

There is a reason subject matter experts get placed in roles like Cheek. She recalls being so scared the first time she was asked to speak to a group but, “Right off the bat I felt like this is what I needed to do.” Having been down and out she knows the view from down there and would really like to keep others from knowing that pain. These people who are entering the work program have completed their sentence and have done what was required of them in form of legal penance. Now, what follows them most frequently from the detention center is a stigma. Cheek said for her, what made a difference was someone taking a chance on her. Now, she is a county employee working day and night to help inmates re-entering society find their footing and attempt to break that cycle for good. “Hope doesn’t exist in a jail. So, when we can say – hang on, there may be a business who is hiring – that can be a game-changer.” 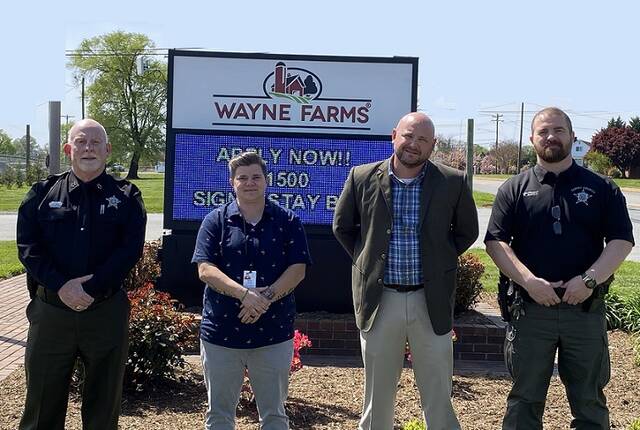